I walked to Fulham this morning to watch the cyclists competing in the Olympic women's road cycling race fly along Fulham Broadway en route to Surrey.

After standing by the side of the road for almost an hour, braving the rain showers and talking to the people next to me, the excitement began to mount. The support vehicles came through, followed by the motorcycle cops and then, at about five minutes past midday, the pelaton swept into view… 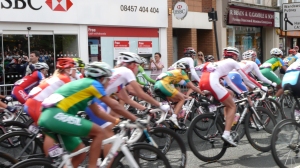 And then it was all over… in about 30 seconds!

I went home and watched what turned out to be a hugely exciting race on the TV.

With just a day to go until London 2012 begins, is it any wonder the capital has gone a bit Olympic mad today?

And somehow I accidentally got caught up in it all on my commute home this evening. 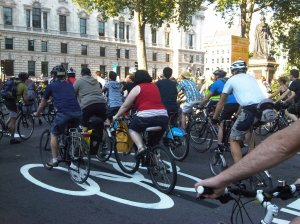 I should have known that when I hit Parliament Square and saw the entire road gridlocked with cars, buses, bikes and pedestrians that something unusual was going on.

Turns out I was about 10 minutes behind the Olympic Torch relay heading towards Hyde Park via Birdcage Walk and Buckingham Palace.

When I stopped at traffic lights I spoke to a policeman who said: "I've never seen anything like this."

"It's called organised chaos," he laughed.

Personally, I couldn't think of a better description, because when I turned down Great George Street either side of the road was lined with flag-waving crowds which extended the entire length of Birdcage Walk, which is about half-a-mile.

The entire width of the road was taken up with cyclists — there were literally hundreds of us in all sizes, shapes and descriptions — like one giant very slow-moving pelaton. 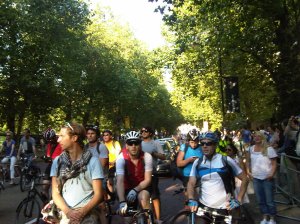 We cycled behind a line of police officers on foot and an ambulance which were effectively separating us from the torch bearers much further down the road. There was lots of stop-starting and standing around waiting for the police to let us move another 100 yards or so.

Any other time and I would have been pissed off. This was going to take me three times as long to get home. But there was a jovial atmosphere and it was hard not to see the funny side with the crowds cheering and clapping us along.

"We're just trying to get home," quipped one cyclist to the crowd. "We're not part of the procession!"

Someone from the crowd asked if Bradley Wiggins was in there somewhere. "It's like watching the Tour de France pelaton," he joked. "Except you guys aren't going anywhere!" 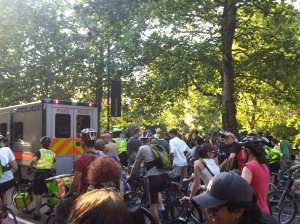 Eventually, when we got closer to Buckingham Palace the police forced us all into one lane so that a convoy of official vehicles could be ushered through. Unfortunately the fun element stopped then, because the police wouldn't let us make a right hand turn — which meant I couldn't follow my normal route home.

I ended up having to wing it — I followed Buckingham Palace Road all the way to Chelsea Embankment and then made my way back home via the busy but fast-moving (and dare I say it, dangerous) A320.

I got in the door almost two hours after I had set off — it would normally take 40 minutes maximum — but I'm not complaining: it gave me material for a blog post, if nothing else! 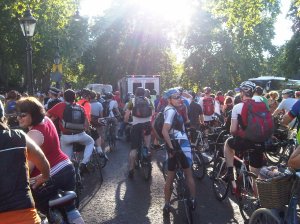 All text and photographs © Kim Forrester unless otherwise stated.